The theme of Loughborough University’s Literary Salon event was to discuss the impacts of the rise of technology on the traditional and trusty book industry. To meet the aim of the event, the hosts Dr Melanie Ramdarshan Bold (Publishing lecturer) and Dr Kerry Featherstone (Creative Writing lecturer) invited a selection of people from different sectors of the industry to speak about how the digital-age has influenced their experience in publishing. 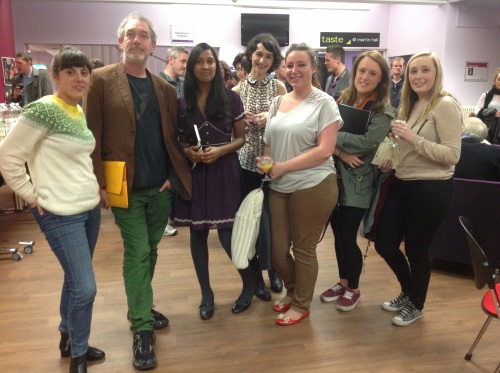 So, who attended and what did they talk about? 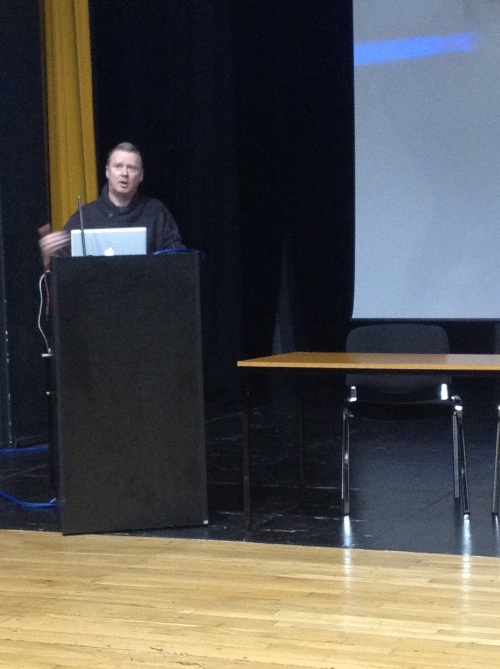 Allan Guthrie – as an agent, author, and publisher, Guthrie has a well-rounded, but conflicting position relating to the publishing industry. Guthrie began by talking about how the publishing industry used to be: author writes a book, agent accepts it, agent sends to publisher, publisher produces it. It is not necessarily like that anymore, technology is allowing authors to reach their readers directly, sometimes cutting out agents and publishers entirely. The key advice that Guthrie gave was to tell people what publishing is about, tell people that publishing is about more than simple copy editing, to make sure the world knows that publishing has an important role to play in society because producing quality books is to the benefit of everyone.

David Varela – has a really cool job. Varela takes a serious attitude to the idea that: ‘anything you can use to tell a lie you can use to tell a story’ and he has created some innovative ways of doing just that. One of the most popular things he has worked on is ‘The Secret Life of Lewis Hamilton’, where the famous F1 driver goes around the globe retrieving valuable stolen paintings; it is such an out-there idea, but so intriguing! So many more means of telling stories are available because of the digital environment, giving authors a wider audience and allowing a more creative approach to stories. The concept of Zombie Run even made me think about buying a pair of trainers just to try it out; if you haven’t heard of Zombie Run it is worth a look!

Ben Galley – with knowledge of the music industry, Ben Galley used his initiative and thought about whether the book industry might be heading in a similar direction. With this thought in his head and computer at hand, Ben Galley set out to self-publish. Galley shared many enlightening thoughts and processes that he went through, too many to discuss them all. A main one was the idea of self-marketing, it is true that no one knows the product quite as intimately as the author himself and it also allows a more personal approach to readers. Galley demonstrated that small details matter when taking up a large venture alone, such as uploading a preview of work on Amazon. Galley claimed that there’s a lot of rubbish out there, especially in the Sci-Fi genre. Self-publishing means no publishers’ logo and thus no official seal of approval, so readers need to know what to expect. Finally, it would be rude not to mention that shiny silver suit! 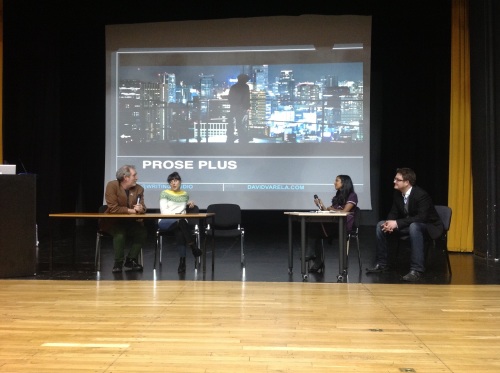 Joanna Ellis and Chris Meade – conducted a round table, the more questions that Joanna Ellis and Chris Meade answered the more questions the audience seemed to think of. Joanna Ellis has a wide background in publishing, with 5 years in marketing at Faber and Faber under her belt she is now an Associate Director at the Literary Platform. Chris Meade was representing if:book, a Literary Salon partner, if:book deals with the issues directly relating to the digital survival of the book trade, and so Chris Meade was a fountain of knowledge and inspiration for thought at the Salon. Some of the questions answered during the round table were about social media and the impacts it has on marketing and communication. As a point of interest, Joanna Ellis noted that the digital impacts came about simultaneously to the release of the first iPad, as people began interacting in new ways and expecting more from online services. 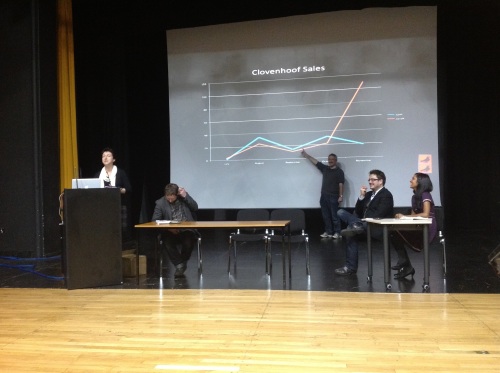 Pigeon Park Press – is formed of a partnership between Heide Goody and Iain Grant, throughout the event the pair worked closely as a team. Pigeon Park Press came prepared with a witty presentation that suited the exciting small publishing house. Pigeon Park Press gave an open explanation of their sales figures, it was interesting that they related their sales graph to real life events and could pinpoint particular marketing activities. Goody and Grant professed that doing events were not useful in terms of sales and the most effective marketing approach, in their experience, is to give things away for free, which encourages traffic back to Pigeon Park Press. 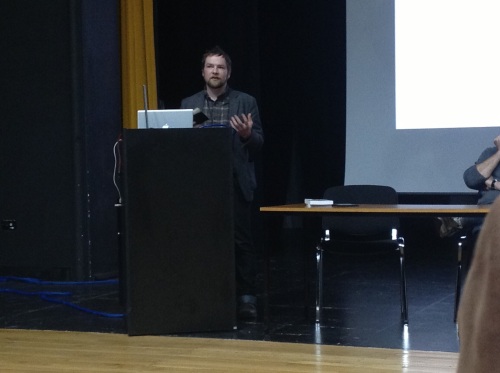 Comma Press – was represented by Jim Hinks, who is clearly very passionate about the niche market that Comma Press is aimed at. Comma Press publish short stories in translation; Jim Hinks claimed that the business could not have chosen a more difficult market, as it combines the difficulty of selling short stories along with works in translation. This area of business means that the acquisition of rights is important to Comma Press and book fairs are used for this, which does not seem to have been affected too much by technology. The exception seems to be the use of Twitter, which is a positive enhancement as it brings people together who would not necessary have otherwise.

Dan Simpson – entertainingly rounded off the night by performing some of his crowd-sourced poems; beginning with a very amusing one about ‘Love… No, not love… Mathematics’. Some people think of poetry as boring, challenging to read and academic to a fault, but Dan Simpson brings poetry off the page by taking lines from the public and then compiling them together in a complex and impressive way to create an original piece. This is possible because of the ease of communication that the digital age has brought about; through Twitter Dan Simpson sought some lines from the audience and participants of the Literary Salon and created a thought provoking piece to summarise the state of the digital publishing era: ‘Ceasing to exist is a reason to survive’.

It would be impossible to cover all of the topics discussed at the Literary Salon, so this is just an outline of some key points. It is clear that technology is changing the way people interact but the extent to which this will affect the publishing industry is still unknown. One thing is clear; Digital Survival is making the publishing industry even more vibrant than ever before.